Florida State Rep. Kimberly Daniels thanks God for slavery, claiming “if it wasn’t for slavery, I might be somewhere in Africa worshipping a tree.”

Rep. Daniels, the sponsor of a bill recently passed by the Florida House that would force every public school to post “In God We Trust” signs, is a dangerous religious extremist that dreams of a Christian theocracy.

During her closing speech on the “In God We Trust” bill, Rep. Daniels cited the recent shooting at Marjory Stoneman Douglas High School in Parkland, Florida: 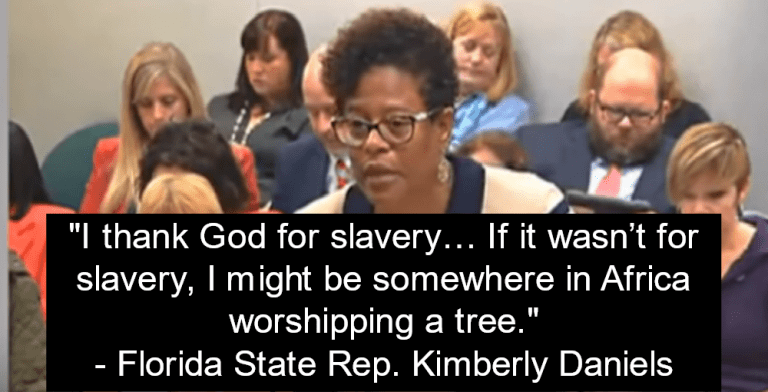 Daniels said that God is the “light” and “our schools need light in them like never before.”

Florida State Representative Kimberly Daniels is on a religious mission, a mission to force her god on other people’s children. She’s been completely open about this theocratic goal as she preaches, “exorcises demons,” and “speaks in tongues.”

Indeed, Daniels is on a religious mission, and she shows no understanding or respect for the secular values upon which this nation was founded. In fact, the confused Christian extremist even goes so far as to thank God for slavery.
In one jaw-dropping clip from the FFRF video, Daniels declares:

I thank God for slavery… If it wasn’t for slavery, I might be somewhere in Africa worshipping a tree.

In another clip from the FFRF video Daniels proudly promotes anti-semitic slurs while minimizing the Holocaust, proclaiming:

You can talk about the Holocaust, but the Jews own everything!

Bottom line: Florida State Rep. Kimberly Daniels, the sponsor of a bill that would force Florida public schools to post “In God We Trust” signs, is a dangerous Christian extremist who thanks God for slavery, and claims that “if it wasn’t for slavery, I might be somewhere in Africa worshipping a tree.”

0 thoughts on “Black Lawmaker Thanks God For Slavery”