The situation in Indonesia is tensed and quite alarming.

Indonesian officials said Saturday that nearly 400 people had been killed in a strong earthquake and a tsunami on the central island of Sulawesi. Rescue workers had yet to reach some areas thought to have been affected, and it was feared that the toll could still rise.

Sutopo Purwo Nugroho, a spokesman for the Indonesian disaster agency, said 384 people were confirmed dead in the city of Palu, where preparations for a beach festival had been underway when the tsunami hit Friday evening, on the heels of a 7.5-magnitude earthquake. Mr. Sutopo said 540 people were injured and 29 were still missing.

But those figures applied to Palu alone, and there were other vulnerable coastal areas where communications were down. Officials had been unable to make contact with Donggala, a fishing community near Palu that was also reported to have been hit by the tsunami.

Dr. Komang Adi Sujendra, the director of Undata Hospital in Palu, said in a video message posted online Saturday morning that the area had no electricity, that phone and internet service had been disrupted and that road access was limited. He sought help from the public, saying that “we hope to build a field hospital immediately.” 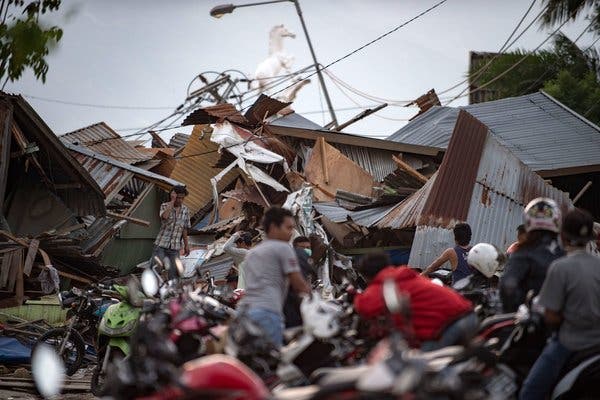 Mr. Sutopo estimated the height of the tsunami’s waves to be about 5 meters, or 16 feet, and a cellphone video reported to have been taken in Palu showed a wave crashing over the roofs of one-story buildings. The buildings then disappear beneath the water.

Mr. Sutopo said on Saturday that thousands of houses and other buildings in Palu had been destroyed, including an 80-room hotel.

“We have found corpses from the earthquake as well as bodies swept up by the tsunami,” Mr. Sutopo said in a television interview.

Extradition of the Guptas begins

Italy begins to open up, after the longest lockdown in Europe

Trump orders US Navy to ‘destroy’ any Iranian gunboats harassing US

0 thoughts on “Huge disaster sweeps through Indonesia: Almost 400 people killed by both Tsunami and Earthquake”